BC has over 87,000 two-lane equivalent kilometres of public roads (including paved and unpaved). Yet, most of this road system is local and includes urban streets, country roads, and bush roads. About 7,000 km of public roads in BC are a part of the national highway system. [1]

In terms of two-lane equivalent kilometres of public roads among all provinces and territories, BC has the sixth largest network (see the table below). [2] 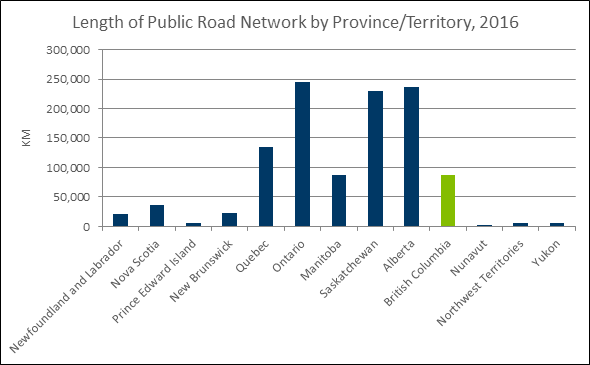 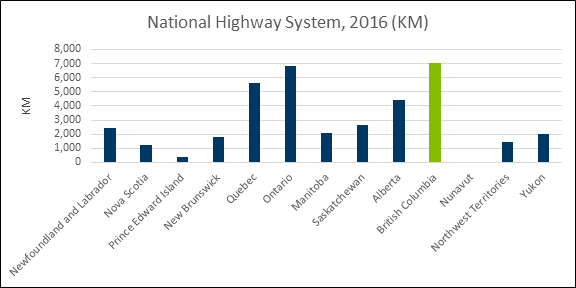 A 2013 study estimated annual losses to Metro Vancouver’s economy of $1.65 billion to $2.25 billion due to wasted fuel, increased greenhouse gas emissions, and lost time and productivity as a result of the region's congested roads. Congestion is also linked to the increased risk of accidents, resulting in higher rates of injury and deaths, as well as higher insurance premiums. This in turn places a larger burden on BC’s healthcare and insurance systems. [4] The trucking industry is especially affected by congestion because 90 percent of consumer goods in Canada, by weight, move by truck.

The trucking industry has no choice but to use the road system. Investors, however, have a choice of where to locate manufacturing, production and retail facilities in Canada and the US. They will gravitate to jurisdictions that provide access to a transportation system that meets their requirements for receiving and shipping their goods.

The Importance of Rehabilitating Roads

The primary causes of road degradation in Canada can be attributed to two factors. The first is Canada's more pronounced freeze-thaw periods. The second is the pressure faced in recent decades by all levels of government to contain road maintenance and rehabilitation budgets.

A working paper [5] by The Centre for Transportation Studies at the University of British Columbia underscores the important of rehabilitating roads:

In a study undertaken at the University of California at Berkeley, researchers found that improved rehabilitation using new pavement technologies found a net present value savings to the California Department of Transportation of $1.17 Billion which can be translated into $21,268 per 2-lane-km equivalent (2011 $s). However, in addition to construction and materials resource savings, the users of the facility will also have lower costs over the time they utilize the roadway system. Because the roadway will be resurfaced less often, fewer closures for maintenance and rehabilitation will be necessary, leading to time savings for users. Costs associated with accidents, safety and emissions associated with congestion will also decrease, which will benefit facility users as well as roadway workers. As an example, the research found annual user time savings of $363.6 million annually and a reduction in accident costs of $179.2 million annually.

The World Bank reported in a June 2005 Transportation Note that postponing maintenance results in large increases in both direct and indirect costs. They state that if roadways are neglected 3 years beyond their normal repair point, repair costs rise up to six times maintenance costs and if this neglect extends to 5 years, it is eighteen times maintenance costs. It also noted that a component of these substantially higher costs was the increased time needed to rehabilitate the road. Therefore, the economic costs to users, the environment and to the economy generally, such as higher inventory costs, would be much higher as well.

Infrastructure Investment in BC

According to the Centre for Transportation Studies, “research has shown that transportation investment has a long-term effect on productivity. Factors such as the infrastructure gap [6] and congestion have a direct impact on economic development." [7]

As shown in the graph below, the BC government’s total road transportation expenditure has generally decreased since 2006, although it did begin to increase in 2015-2016. [8]

Because many areas in this province require infrastructure investment, BCTA surveyed its members (2017) to find out which investments are more important for the trucking industry. The top five responses are shown in the chart below:

*Note: Responses add up to over 100 percent as respondents were asked to choose their top five priorities.