There were approximately 39,400 total employees – including professional truck drivers and all other occupations – working in the BC trucking industry in 2017.[1]

The trucking industry is facing challenges in meeting its demand for qualified professional drivers, particularly in the long-haul sector.

BC’s 2017 Labour Market Outlook indicates the transportation and warehousing sector is one of the top five industries that will account for about half of the projected job openings in BC between 2017 and 2027. Transportation and warehousing sector will provide a total of 62,400, or 6.8 percent, of all job openings. This includes 40,900 replacement positions and 21,500 positions due to expansion of the industry.

The Labour Market Outlook also projects 9,000 job openings for transport truck drivers between 2017 and 2027 in the Lower Mainland/Southwest region of BC alone, with over 5,000 more openings in the rest of the province.[2]

A 2016 report by transportation consultants CPCS forecast a shortage of 34,000 truck drivers across Canada by 2024, reflecting an increase in demand of 25,000 and a decrease in supply of 9,000. The shortage could increase to 48,000 drivers based on how different trends could affect industry demand, labour productivity and occupational effectiveness.[3]

In BC, CPCS anticipated the gap to be between 2,200 and 4,500[4] drivers depending on the strength of the economy. Because trucking plays an integral service role for so many industries, insufficient supply of truck drivers could have significant negative economic implications for both the BC and Canadian economy. As well, since 90 percent of final goods are delivered by truck, there is a direct correlation between the macroeconomic landscape and the demand for trucking services. The projected overall growth of the economy and the demand from manufacturing and retail industries translate to a commensurate increase in demand for qualified professional drivers.

Trucking is a male-dominated industry; only 3 percent of professional truck drivers in BC were female in 2016.[7] 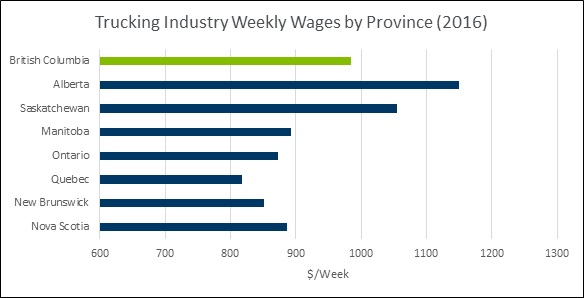 [4] Note: this projection does not factor in greater demand related to large BC-based resource projects, should they go forward.